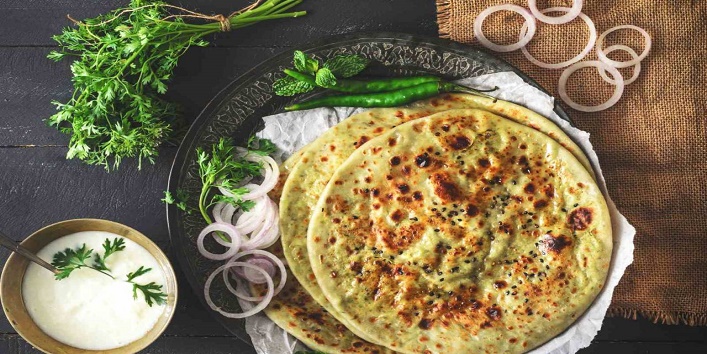 Kulchas are just another type of flat bread which is very popular in the northern parts of the country. But just like naan these too are just restricted to special occasions or when you are eating out and not eaten on a day to day basis. You can prepare kulchas either plain or stuff them with fillings made out of potato, paneer or with soya. Today I am going to share with you the recipe of my favourite soya kulcha which goes really well with chhole or any Punjabi style curry.
So without any further due let’s get started with the recipe.

Ingredients:
For the dough:
Whole wheat flour- 1 cup
All-purpose flour- 1 cup
Baking soda- ¼ tsp.
Curd- 1 tbsp.
Oil- 1 tbsp.
Sugar- 1 tsp.
Salt- 1 tsp.
Water- ½ cup (approx.)
For the kulcha stuffing:
Soya granules- 200 grams
Coriander leaves- 3 tbsp.
Green chilli- 2, chopped
Red chilli powder- ¼ tsp.
Garam masala- ¼ tsp.
Carom seeds/ajwain- ½ tsp.
Dried mango powder/amchur- ½ tsp.
Salt- as per taste
Ghee/oil- for cooking the kulcha
Butter- as per requirement
Sesame seeds/til- for sprinkling on the kulcha
Procedure:
1. Transfer the whole wheat flour, all-purpose flour, baking soda, curd, oil and salt to a mixing bowl and mix all the ingredients really well.
2. Now slowly start adding the water little by little while kneading the dough. Don’t add too much water in one go. Add water according to the requirement and knead a soft dough.
3. Cover the dough with a damp kitchen towel and place it at a warm place for 2 hours.
4. In another bowl soak the soya granules in hot water. Once the soya granules are soft, squeeze out the excess water and keep in another bowl.
5. Heat a kadhai and add some oil to it. Add the chopped green chillies and carom seeds to it. Now add the soya granules along with the red chilli powder, garam masala, amchur powder and salt to it. Cook the mixture until all the moisture has evaporated and the stuffing looks cooked.
6. Once the dough has been leavened for 2 hours knead it lightly.
7. Divide the dough into medium sized balls and keep them covered with a damp kitchen towel.
8. Now take a dough ball and dust it lightly with some flour. Place the dough ball on the rolling surface and roll it with a rolling pin to get a circle of 5-6 inch diameter.
9. Place 2-3 tbsp. of the soya filling in the centre of the circle and bring the edges to the centre. Seal the edges nicely to prepare a stuffed ball. Prepare all the dough balls in a similar manner.
10. Now take one stuffed dough ball and dust it with some flour. Place it on the rolling surface and roll it with a rolling pin to get a circle of about 6-7 inch diameter. Sprinkle some sesame seeds on top of the kulcha.
11. Heat a tawa and place the prepared kulcha onto it. Flip the kulcha after a few seconds. Apply the ghee/oil on the top side.
12. Flip the kulcha and let the oiled side get cooked.
13. Now apply ghee/oil on the top side and flip the kulcha after a minute or two. Cook the kucha from both the sides until golden brown in colour. Press the edges of the kulcha with a spatula so as to cook it evenly.
14. Remove from the tawa and slather butter on top of it.
15. Serve the kulcha hot with chhole, paneer curry or with just curd and pickle. 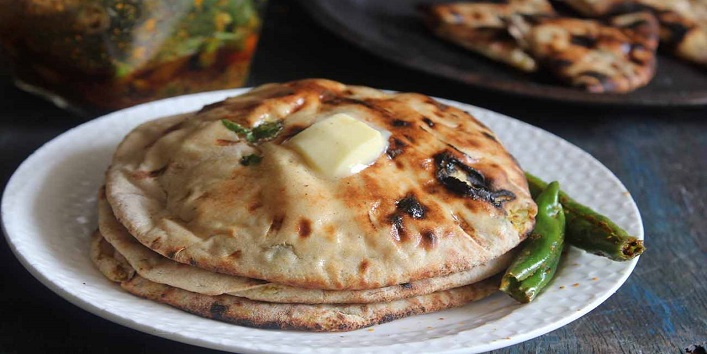