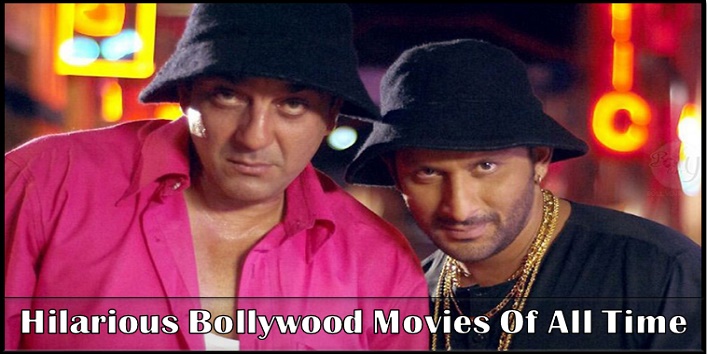 Comedy is the most powerful and entertaining form of entertainment. It is very clearly said it is easy to make people cry with a great story but quite difficult to make an entire room of people laugh at a joke. Nowadays, comedy has the same stereotype plots. But, thankfully in the past, Bollywood has also produced some amazing comedy movies which are still known as the hilarious Bollywood movies.

This movie from the black and white era, still manages to entertain us in the most unusual manner. The story of three Ganguly brothers with insane personalities was portrayed by Ashok Kumar, Kishore Kumar, and Anup Kumar. And the best thing about this movie was it completely relied on true comedy and there was nothing absurd and offensive that we see nowadays.

Can someone bring back the good old days of Hrishikesh Mukherjee movies? His movies were filled with wit, clever dialogue delivery, and of course mischievous characters. And Chupke Chupke is that kind of film which makes us go back to that era.

Also read: Latest in Bollywood: Top 7 Bollywood Movies to Watch out in 2018

The movie Angoor is known as the benchmark for comedy in Bollywood. Directed by Gulzar, this movie was all about hilarious dialogues and clever script.

Remember this classic movie. Well, this movie is no doubt a cult classic one for just one reason which is a mad comedy (the Mahabharata scene). This movie broke the barrier between the commercial and art cinema and was also loved by the audience. This movie was definitely one of its kind.

When we talk about comedy, how can one forget Baburao? This movie was a perfect blend of hilarious dialogues, punches, and of course the well-sketched characters that we still remember. Surely, one of the best Bollywood comedies.

This fake doctor put a smile on the entire country’s face and how can we forget the ‘Jaadu Ki Jhappi.’ This movie addressed a very important issue without being moralistic, which was the best thing about this movie.

So, these were the few hilarious Bollywood movies of all time.